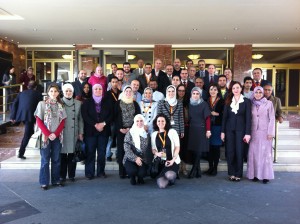 Participants in the Training for members of RECs in Amman, Jordan

MERETI, in collaboration with Salim El-Hoss Bioethics Program of AUB and the Jordanian Society of Forensic Science, held a  5-day workshop on Research Ethics for members of Research Ethics Committees (REC) for individuals from the Arab region. The workshop, held in Amman Jordan, was attended by more than 50 participants from Jordan, Saudi Arabia, Sudan, Yemen, Qatar, UAE, Lebanon and Egypt.  One attendee was also from Afghanistan where he is a member of the only REC present in the country.

A variety of topics were discussed, which included but not limited to informed consent, clinical trials phases, risks/benefits assessment, ethics of genetic  research, protocol review and Islamic bioethics. The lectures were interspersed with engaging interactive sessions consisting of protocol review and case discussions.  One of the notable protocol reviews involved a survey regarding water pipe ( ‘shisha’ or ‘argeila)’ smoking, which is considered a normal habit in Jordan, but maybe not quite as acceptable in Saudi and Egyptian culture, especially among women teenage populations.

Each day ended with a review of a research protocol. Participants were divided into groups and together assessed the social value, risks and benefits, informed consent, confidentiality and privacy of the protocol. One of the features of the workshop was the interactivity that continued after hours via an online discussion forum at www.menareti.net.

The faculty members included Dr Silverman, the Director of MERETI and MERETI alumni from Jordan:  Ibrahim Ramahi,  Amid Abu Hmaidan, and  Suhail Al-Amad, as well as other alumni including Hany Sleem, Nahed Ali, and Amal Matar from Egypt.

A second 3-day workshop on International Research Ethics was held immediately after the first and included more than 40 attendees from the Arab Region.  Topics included concepts of exploitation, what constitutes fair post-trial benefits,  standard of care issues, and ancillary care benefits.