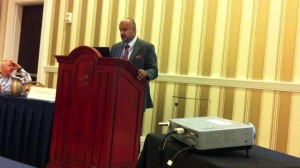 Dr. Tamer Hifnawy, a MERETI alumnus, was invited to give a talk during PRIM&R Advancing Research Ethics Conference held in December 2011. His presentation addressed the Egyptian experience of globalization of research with particular focus on sponsors, Contract Research Organizations (CROs) and Institutional Review Boards. In this blog, I shall give an overview of his presentation. Hifnawy also presented concerns of informed consent such as language barriers and lengthy complex forms.

Dr. Hifnawy, an Associate Professor of Public Health in Beni Suef University but currently on sabbatical leave and working in Taibah University of the Kingdom of Saudi Arabia, started his talk with a personal but rather tragic experience when he was still a medical student.   At the time, he suffered a back problem and sought the advice of a consultant. The consultant recommended a brand new treatment that would help cure the back problem and after months of painful injections the problem was not resolved. It was not until years later that Dr Hifnawy discovered that he was part of a clinical trial that he never consented to.

But not all clinical trials conducted in the developing world have questionable ethics. In fact, Dr Hifnawy discussed some of the advantages to host countries of participating in clinical trials.  These include, but are not limited to: ‘exposure to the recent technologies and drug therapies and training of local health professional as well as paving the road to upgrade local biotech industries’. He gave a short history of RECs in Egypt where the first REC was established in Azhar University in 1996 to review reproductive technology research. The Egyptian National Ethics Committee was also established in the same year by the Ministry of Higher Education and had 40 members. Since then, many RECs have been launched in medical schools and research centers across the country.

The national budget for research in Egypt is very small, yet there has been a noticeable increase in number of clinical trials. In 2008, according to www.clinicaltrials.gov there were only 83 clinical trials, but this has almost quadrupled in 2011 to 261 trials.  As previously discussed  by Henry Silverman in a talk at the AUB Conference in Sept. 2011, these data showing  the discrepancy between the existence of small budgets for research and an increase in clinical trials can by explained by the outsourcing of clinical trials by foreign countries.  This increase may alarm research ethicists, because there are no national guidelines in Egypt.    While lacking national regulations,  Egypt’s constitution does state in  Article 43 that  ‘any medical or scientific experiment may not be undergone on any person without his free consent.’ In addition, the Egyptian medical syndicate assigned a whole section for human subject research in its professional regulations.

But the lack of national guidelines is not the only challenge sponsors may find.  Cultural issues, such as physician’s ‘unwillingness to lose control of patient’s care’ when the later becomes part of a clinical trial or reluctance of investigators to admit uncertainty of the new treatment’s effect because this may negatively impact the patient’s view of the physician. Sponsors also have to consider that regulations in Egypt do not allow phase 1 clinical trials and also, biological sample transfer require national security clearance, which may take up to 6 months, if approved.

When discussing CROs, Dr. Hinfawy defined the function of CROs in Egypt as  bringing the highest level of expertise in local language to bridge the gap between sponsors’  “high expectations and investigator’s performance”. Though he does not know the exact number of CROs in Egypt, he very much doubted there are more than 10 in the country. He gave an overview of the roles of CROs, which included carrying out feasibility studies, selection of investigators, submission of protocols to regulatory services, and monitoring of research.

Future directions in the ethics of research in the developing world awaits us.

One Response to Egyptian Experience: Globalization of Clinical Research; Emerging Issues for Sponsors, CROs and IRBs