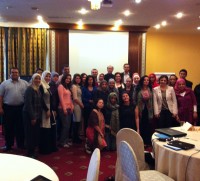 This year, the MERETI held its annual workshop in Cairo, Egypt. The event took place in Flamenco Hotel located in the diplomatic area of Zamalek. Attendees have arrived from Sudan, Lebanon and Palestine as well as from the host country Egypt. We also had participants from Morocco and Indonesia. The participants had different professional backgrounds; most were medical doctors but some were pharmacists, nurses, IRB admin personnel and 2 participants had social sciences background. The diversity enhanced the interactive and rich discussions where each participant brought in his/her unique perspective.

Dr. Henry Silverman, the Director of the Program, and MERETI Alumni; Isabelle Nakhla (2005 alumnus), Amr Shebaita (2007), Azza Saleh (2007), Hany Sleem  (2007), Rehab AbdulHai (2009) and Noha Assem ( 2009), Amal Matar (2010) all gave talks on introductory topics to research ethics. Among the topics discussed were ethical review of research, research methodologies, assessing the risks to benefits ratio and vulnerability. To initiate discussions and input from participants, several cases and protocols involving ethical transgressions were deliberated upon during the course of the workshop. Ten participants were selected for the 2013 certificate, MPH and MSc. programs.