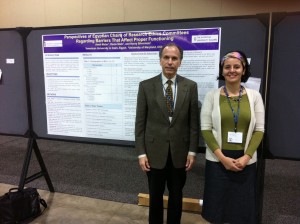 As a Middle Eastern, relatively young woman, who only has just taken the baby steps in the field of research ethics, I was surprised to win the Pillar Prize of Public Responsibility in Medicine and Research (PRIM&R) of 2010. The award entailed presenting my research at PRIM&R annual research conference where almost 2500 participants attended. Most came from all over the United States, but there were about 100 individuals from the developing world.

The experience was very valuable. Besides networking with research ethicists, researchers, CROs and IRB members, I was invited to give a pre-training session entitled ‘obtaining consent in the face of culture, religion and language in resource limited countries.’ In a room with almost 50 attendees, we discussed a case study (developed with the help of Dr Silverman and Dr Sleem) that addressed most of the common issues regarding informed consent in Egypt.

One of the major concerns discussed was the language of the informed consent. In the context of Egypt, care must be taken when translating the informed consent form in the Arabic language, which in turn would be read out in an Egyptian dialect for research participants who may be illiterate. Questions such as how simple should the Informed Consent Form (ICF) be so illiterates can comprehend it and whether a high school language level is appropriate or whether a lower grade level would be more appropriate? The length of the ICF was an issue raised as well, since most of international trials have very long ICFs (as long as 40 pages sometimes) and research participants are expected to read and sign it. The discussion included the optimal methods to shorten the length without obscuring any of the ICF components defined in international guidelines.

Another issue involved is considering the local culture while taking the consent.  For example, considering gender issues in research; which would entail having  a female researcher approach a female participant, particularly in research of gynecology/obstetric nature.  Also considered was the process to follow to obtain permission from the chief (Omda) or the leader of village, which might make the consent process more complex.   It was emphasized that such permission from the village leader  is not to undermine the autonomy of the research participants, but rather provide support to the decision making process.

In a country where illiteracy rate is as high as 40% and the population under the national poverty line approached 20%, many of the research participants could be categorized as vulnerable and therefore extra measures should be taken to avoid their undue inducement and protect against their exploitation.

After the lengthy discussion of the case, a role play was acted out where I became a poor Egyptian woman who could not read or write and was being recruited for a breast cancer research involving genetic analysis. The interchange between one of the attendees and I was quite demonstrative, because she tried to use the simplest language possible to explain medical terminologies such as genes, genetic analysis and research. In her recruitment strategy, she considered the husband and village chief. I think the audience were able to comprehend some of the challenges we may face while obtaining consent from research participants in Egypt.

I have to admit the session gave me an insight of how pharmaceutical companies, researchers and IRB members in one country may find it difficult to understand the nuances and differences across cultures. Though we all agreed on general principles of research ethics of autonomy, beneficence, non-maleficence, and  justice, implementing such principles vary widely across cultures and only through such sessions one can communicate the differences and the best way of addressing them.

WHO Publishes Standards and Operational Guidance for Ethics Review of Research
Recruitment strategy in India: “How poor Indians are recruited for clinical trials”

One Response to PRIM&R Conference: My Experience