The Tunisian uprising was ignited in December 2010 by the self-torching of a street vendor named Mohamed Bouazizi. This act of desperation signified Mohamed’s protest against a policewoman who seized his vegetable cart and fined him. Tunisians took to the streets and within a month President Ben Ali fled the country.

With the new interim government in place, there are numerous questions on the future status of scientific research in New Tunisia. The following figure illustrates the number of Tunisian publications from 2000-2008, the number of publications in neighboring countries, the number of researchers per million population and the percentage of GDP spent on R&D. 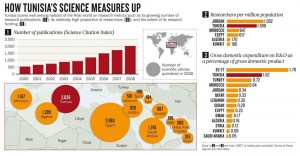 The figure, courtesy of Nature, shows steady increase in the number of Tunisian scientific publications since the year 2000 to reach 2 thousands by 2008. (fig 1) In 2007, there were almost 1,600 researchers for every million population and the government spent 1.02% of its GDP on research and development.

2 Responses to Status of Scientific Research in Tunisia